The voter registration deadline had reached its final day, and not surprisingly, there was a procrastinator or two among the 53 percent of Browns players who were signing up for the first time.

But Ron Brewer was relentless. 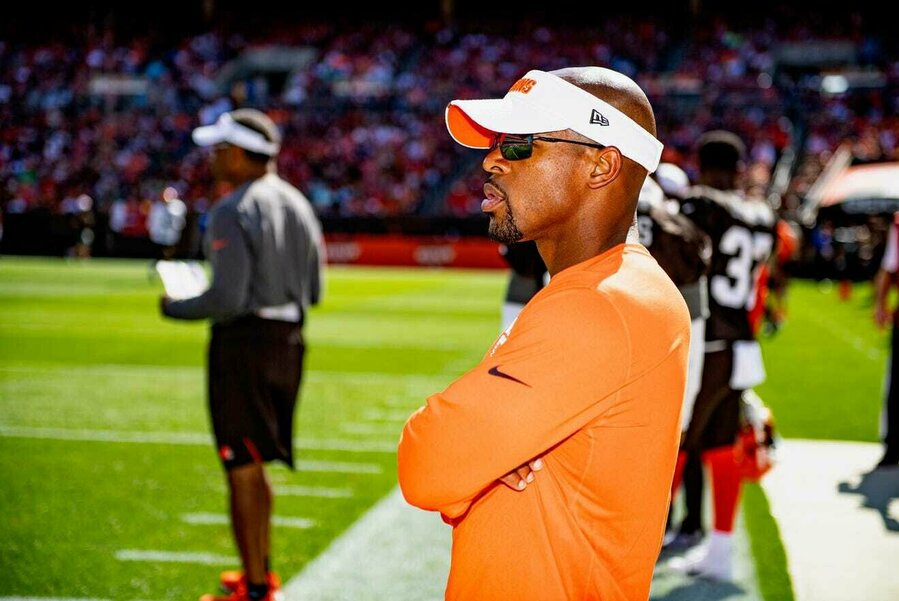 The Browns’ director of player engagement who spearheaded the team’s initiative had spoken in each position meeting with coach Kevin Stefanski’s blessing when the drive was launched. Brewer encouraged unregistered players such as Baker Mayfield, Odell Beckham Jr., Nick Chubb, David Njoku and Rashard Higgins.

Brewer said Chubb “took the bull by the horns and handled it on his own.” Others weren’t so easy.

For some, Brewer put applications in the envelopes and mailed them. He made sure six players got to a Department of Motor Vehicles office for their required Ohio driver’s license or state ID. He shepherded two who showed up there without the required documents and had to go home and get them. He did everything but drive them to the DMV.

“I’m big on not enabling; I want to help these guys grow as much as possible,” Brewer said during a Tuesday phone interview. “I had to really urge some guys, ‘We’ve got one more week we can go. One more week and you’re not going to be able to register.’

He put an application in one player’s locker and said it sat there for over 10 days. Finally, he called the player into his office just outside the double doors to the locker room and they filled it out together.

Relying on a website that had each state’s requirements for those who wanted to vote where they live in the offseason, Brewer ticked the unregistered names off his list one by one and his determination grew.

In the final hours, he wouldn’t accept anything less than full participation. Stefanski made that the team’s goal when the league created its NFL Votes and #AthleteAndVoter initiatives in August.

“Everybody’s different. Some people it takes, ‘This is the last day we can do this,’” Brewer said. “That’s the benefit of my position and being next to the locker room, I try to make it as easy as possible. But at times I get aggressive for something that’s important like this. Online registration, I’d say, ‘Come in my office, sit down right here, let’s knock this out, me and you.’

“I did have to go down to the last day.”

The NFL and NFL Players Association announced Wednesday that 90 percent of active players were registered to vote. A league spokesman said the Browns were one of six teams that reached 100 percent, along with the Indianapolis Colts, San Diego Chargers, San Francisco 49ers, Seattle Seahawks and the Washington Football Team.

“I’m happy that we’re able to embrace this, set an example, we’re one of six teams where all the guys got registered, that’s huge,” Browns safety Sheldrick Redwine said by phone Wednesday. “Hopefully people can see that and be able to jump on the train with it.

“I knew Brew was working constantly. He texted me a couple times making sure I got registered. I feel like Brew has sort of been an unsung hero in this entire social justice committee that we’ve started. He’s got a lot of our conversations started with great questions. I appreciate his efforts and his passion and I see the work he’s putting into it on top of his regular job with the Browns.”

Linebacker Mack Wilson said he considers Brewer “like my big brother” and wasn’t surprised by his commitment to the cause.

“Ever since my first day here, he’s the guy I call. He’s got an answer for every question I ask him,” Wilson said by phone on Thursday. “He always makes sure his little bros, the guys on the team, are taken care of and are doing the right things to use their platform to be great men.”

In a year rocked by protests over racial injustice and police brutality, learning how to use their platform included a greater understanding of the voting process.

“Voting means a lot to me because it’s a right that historically hasn’t always been afforded to every man and woman in this country,” Wilson said. “We came a long way in America. But the only way we can truly have our voices heard is to put leaders in power that will listen to the people and to listen to their struggles and their problems.”

Brewer said interest in voter registration came out of discussions after Stefanski formed the players’ social justice committee in the wake of the death of George Floyd in May.

“We set a commitment to making an impact on the area of social justice and this was the one we emphasized,” Brewer said. “This isn’t the sexy one. This isn’t ‘I’m going to give $10,000 to this organization and let everybody see me.’ This is the one where we’ve got to sit down and fill out the application and mail it in and nobody sees that.”

If there were Browns who needed help beyond their presidential choice, Brewer prepared them for that, too.

“I had never done this before, I requested sample ballots because times I have voted you know the presidential [candidates], but then you look at all these other options and you’re just guessing on who to vote for,” Brewer said. “This year I said, ‘Let me hand out some sample ballots so people can do their research and see who these individuals are.’ I put those in the locker room for people to see.”

Brewer, 39, a former football captain at the University of North Carolina, has also worked in player engagement at his alma mater, Louisiana State and the Minnesota Vikings. He admitted he didn’t vote until 2008, when he was in Minnesota during the historic election of President Barack Obama.

Brewer got some pushback, mainly from the rookies, who believed their vote didn’t count. Beckham also felt that way, confessing that was his mindset during a Sept. 24 Zoom interview following the Kentucky grand jury decision on the Breonna Taylor shooting. Some players were suspicious about what went on behind the scenes when the votes were counted.

“I get it that argument. But that is something out of our control,” Brewer said. “Really had to educate them on why to vote and not listening to the myth that my vote doesn’t count. ‘They’re going to do what they want to do, anyway.’ Not thinking of you as an individual, but you as a collection of individuals. For every one of you saying, ‘I don’t want to vote.’ Let’s say there’s 10,000 people on this earth that say the same thing you do, that’s 10,000 votes that don’t get submitted.

“We have this opportunity to have our voice heard. You saw what happened in our county this summer with George Floyd. Everybody talked about having an impact. We focused on understanding that this is a place of impact.”

Brewer said he had support from Stefanski and owners Dee and Jimmy Haslam.

“This is my sixth season and I’ve never had an opportunity to talk about it in a team meeting like I have this year. Coach Stefanski was spearheading it almost,” Brewer said. “‘Hey, Ron, do you need to say anything in the team meeting about this? What are our deadlines? Where are we?’

“From the time I found out the information about how many guys were registered and how many were not and I sent that over to him, he was full speed ahead on ‘Let’s see if we can get everybody registered.’ Ownership said, ‘Let’s also encourage their wives and significant others and family members to get registered as well.’”

Stefanski commended the players for understanding their civic duty and “taking the first steps to participate in the democratic process.”

“We’ve encouraged our players to be involved in their communities and to use their voices to make an impact,” Stefanski told the Beacon Journal. “Voting is something we can all do to be heard and I’m pleased our players recognize the importance.”

General Manager Andrew Berry praised Brewer for the “excellent job” he did in enabling the Browns to be one of six NFL teams to reach 100 percent.

“We’re very proud of the level of engagement our players have had in our drive to get people registered to vote,” Berry told the Beacon Journal. “Our guys have taken a proactive approach to educating themselves on key issues and have been advocates of making sure everyone uses their voice to make a positive impact at the polls this November.”

Mayfield, Beckham, Jarvis Landry, Myles Garrett, Stefanski and Berry made voting public service announcements. Jedrick Wills and members of the Columbus Crew played Call of Duty video games with those who had registered to vote.

The NFL mandated that facilities be closed Tuesday for Election Day, although players will still report for daily COVID-19 testing and those injured can come for treatment.

Asked if he came out of the past few months with a new awareness about the social justice issues America faces, Brewer said, “The biggest thing is once we started to ask the question of ‘How you do hold police officers accountable when they step out of line or do something outside the job requirements?’

“As I started to dig and ask questions with the Players Coalition, we talked about police unions and mayors. The next question is ‘Who elects them?’ That’s when the voting came about. My perspective changed because I was not as educated as I should have been on the mayor, the police unions, the contracts, the immunity, the decisions of lower level voting, not just the presidential election. That was another push with our players, ‘This is how the system actually works. These are who are elected, this is where the voting process comes in.’”

A member of the social justice committee, Redwine said he understands why Brewer is so passionate about what they discuss. But in his native Miami, Redwine knows many people who aren’t registered to vote and don’t care about politics. Even if the events of the summer brought an awakening, Redwine, 23, sees much more work to be done.

“This type of stuff has been going on forever. It’s not really a matter of awareness anymore,” Redwine said. “It’s about the people who have the ability to make change, them wanting to make change.”

Redwine wants to believe that the Browns reaching their voter registration goal will set an example. But as Black men and women continue to die at the hands of police, he’s sobered by reality.

“I’m always hopeful that it has some type of impact,” Redwine said, “but it’s a long road ahead.”