BEREA, Ohio – During today’s John Adams Field dedication ceremony, the Cleveland Browns announced multiple changes to the operations of the Browns Pro Shop at FirstEnergy Stadium, highlighted by the team’s pledge to donate all of its net proceeds from items purchased in the store to support Browns Give Back’s commitment to education and youth football. 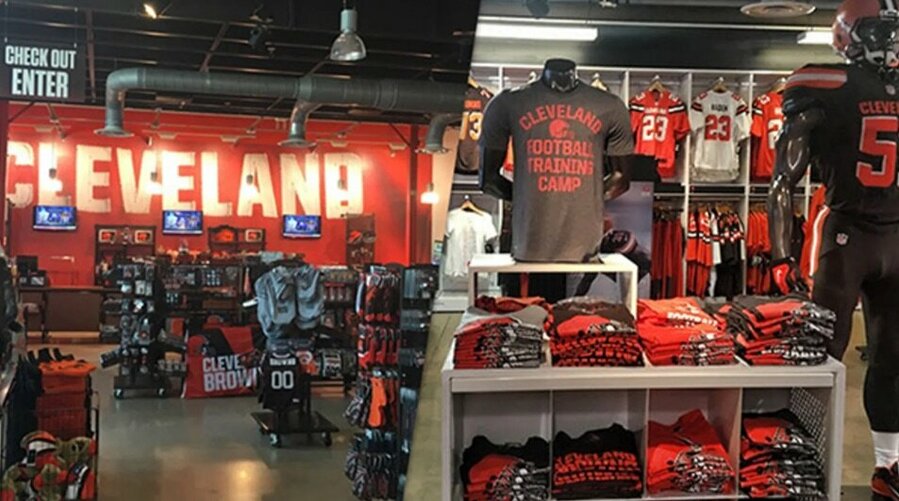 Beginning retroactively with transactions on April 1, 2017, 100 percent of the Browns’ net proceeds from product sales at FirstEnergy Stadium’s Pro Shop on gameday and throughout the year will benefit educational initiatives and additional neighborhood fields projects, similar to the one celebrated today at Cleveland Metropolitan School District’s John Adams High School. The Browns will no longer individually profit from transactions made within the Pro Shop.

“Throughout the Browns organization, we will always emphasize that one of our most important responsibilities is to maximize the special opportunities we have to represent Cleveland and make a meaningful impact within our community,” said Dee and Jimmy Haslam. “By donating all our proceeds from the Pro Shop, we have a unique avenue for our team and incredible fans to support our city, including through important educational and developmental projects like installing five CMSD multipurpose-use neighborhood fields.”

The Browns are the first NFL team to dedicate their Pro Shop’s year-round net proceeds to community initiatives.

Courtesy of a significant commitment from the Haslams, five schools in the Cleveland Metropolitan School District received new high-quality synthetic turf fields and scoreboards during the past two years.

NOTE: All components impact in-store purchases from the Browns Pro Shop at FirstEnergy Stadium. The operational changes are not applicable to transactions involving Browns merchandise online or from other NFL-licensed retailers.

The Browns Give Back to Northeast Ohio with a commitment to education and youth football while engaging the community through the team’s signature First and Ten volunteer movement. For more information, visit www.clevelandbrowns.com/brownsgiveback.

Education – A core focus of Browns Give Back is education, and the Cleveland Browns Foundation supports this mission through financial grants and other resources to local, education non-profits to ensure youth in Northeast Ohio receive the education and development they need as a foundation for independence and success. The Cleveland Browns Foundation has identified three areas of impact – school attendance, early learning and college and career readiness – with the goal of identifying opportunities, removing barriers and providing support for students to empower them for long-term success.

Youth Football – The Cleveland Browns are committed to assisting the development, safety and growth of youth and high school football throughout Northeast Ohio with year-round programming for players, coaches, officials and parents. Through camps, clinics and other initiatives, the Browns’ goal is to promote healthy, social, emotional, intellectual and physical development of youth by enhancing opportunities for youth football participation and education.

First and Ten – Launched in June 2014, the Cleveland Browns First and Ten campaign is the team’s community program, established to inspire fans to #give10 and help their communities by volunteering for 10 hours each year. Through First and Ten, the Browns are the only NFL club to promote a long-term volunteering program that unifies the team and its entire fan base, with the goal of impacting every individual’s city across the globe, as well as the franchise’s local community. To date, more than 1.5 million hours of volunteering have been pledged through First and Ten. All Browns fans are encouraged to join the volunteering effort by signing the First and Ten pledge on the team’s website and by sharing their stories with #give10.