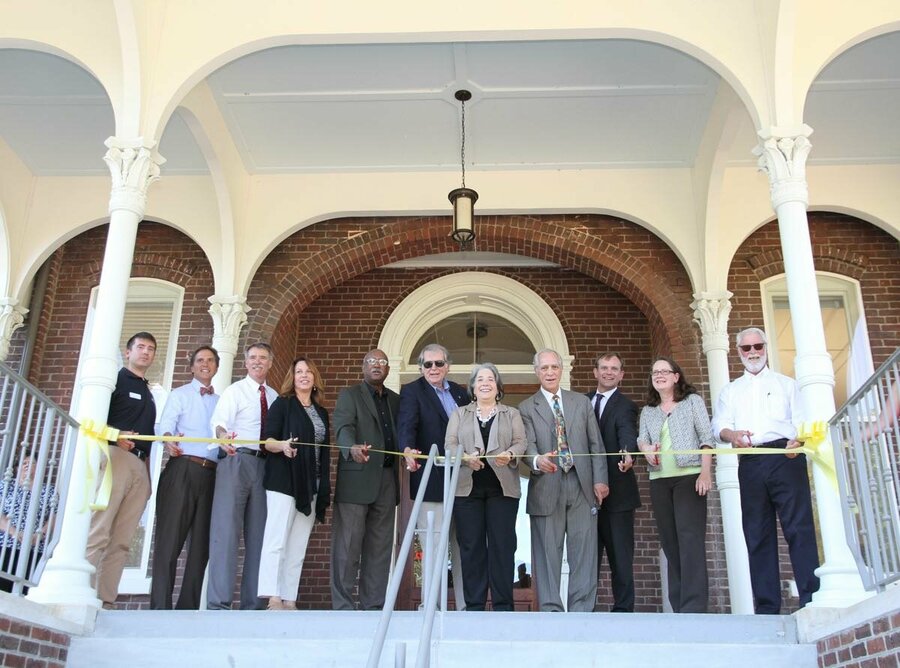 The historic and architectural spectacle that has towered over the heart of what is now Lakeshore Park for well over a century will remain a mystery no longer to area residents.

“This building is an architectural and historic gem that we felt was very important to preserve,” said Mayor Madeline Rogero. “For more than half of Knoxville’s history, it’s been closed to the public as it served the Lakeshore Mental Health Institute; now it will serve all of Knoxville for years to come while improving access to City recreation services.”

Lakeshore Mental Health Institute established in 1886 and closed in 2013, representing 127 years of service to thousands of mental health patients in Middle and upper East Tennessee.

The three-story building will now house office space for Parks and Recreation staff and one Lakeshore Park Board staff member, as well as a public meeting room available for reservations, thus opening the building to continuous public access.

“The City has done a great job in restoring this iconic building,” said Dee Haslam, the Lakeshore Park Chair. “The restoration is consistent with the high standards we expect for all improvements at the park, which will ensure that these facilities continue to be used for generations to come.”

The contractors for the project, Elizabeth Eason Architecture and Johnson and Galyon Construction, took steps to preserve the structure’s original character per the City’s request, such as rehabilitating the building’s grand porch entrance, keeping the original windows, and reinforcing the elaborate three-story staircase rail.

There were also sustainable upgrades made to the building, including the addition of new storm windows with low-e coating, energy efficient LED light fixtures with daylight and vacancy sensors, improved roof insulation, and efficient plumbing fixtures, to name a few.

“This project provided a rare opportunity for the City to restore and preserve the memory of a 132-year-old building,” said Christi Branscom, Deputy to the Mayor and Chief Officer of Operations who oversaw the building’s rehabilitation project. “At the same time, we were able to integrate environmentally responsible upgrades that will save the City in ongoing operating expenses, so there’s a nice marriage of the past and future in this project.”

Since the State of Tennessee conveyed the property that had served as the Lakeshore Mental Health Institute to the City in July 2013, the City has invested more than $6.8 million in infrastructure, demolition and other improvements for the transition toward the new Lakeshore Park.

The infrastructure improvements included replacing outdated water, sewer, gas and electric lines, some of which had predated World War II.

The project was especially considered an accomplishment with 83 percent of the materials removed either getting recycled or reused and considering the fact that the park was never closed throughout the duration of removing 20 buildings from the property.

Haslam noted that the City’s investment in demolition, utilities and infrastructure paved the way for construction of the Phase 1 park improvements. “The City’s investment let us focus on our capital campaign for park improvements, all of which will be funded through private contributions. This twenty year public-private partnership has created a great central park with something for everyone.”

In December 2013, the City and the Lakeshore Park Board began to seek public input for a $50 million Lakeshore Park Master Plan to make significant improvements to the park’s 185 acres.

Some of the most anticipated amenities revealed in the master plan include a river walk, canoe/kayak launch, gardens, picnic areas, event and recreation fields and renovation of the park’s chapel as an open pavilion eventually be used for special events.

Since then, the implementation of ongoing upgrades have been underway. In June 2014, the Farmer’s Association for Retail Marketing (F.A.R.M.) opened a farmers’ market held Fridays in one of the park’s eastern-most parking lots. Additionally, the 1.2-acre, fully accessible Hank Rappé Playground was opened in September 2015, thanks to fundraising by the Lakeshore Park Board.

Today, in addition to the City’s opening of the administration building, the Lakeshore Park Board announced that the construction of two miles of additional trails and other park improvements will get underway in October 2016.

Lakeshore Park has had a long-standing sports league presence through the Knox Youth Sports baseball, softball, flag football and lacrosse programs held on the park’s existing six ballfields and the soccer league games organized by AYSO and The Crush on the park’s three soccer fields .

“We couldn’t be more excited to move into the beautiful and historic Lakeshore Park administration building in a time when the park will be seeing state-of-the-art recreation upgrades,” said Joe Walsh, City Parks and Recreation Director. “We’re very grateful to our friends at the Lakeshore Park Board for making the $25 million in park upgrades possible.”

“If you look at a map, Lakeshore Park is actually geographically located in the center of Knoxville, and so we’re thrilled to use the tagline on the park’s web site: ‘Lakeshore Park: A Park for Everyone.’”