CLEVELAND — Rashard Higgins remembers when he was a youngster growing up in Dallas, Texas. 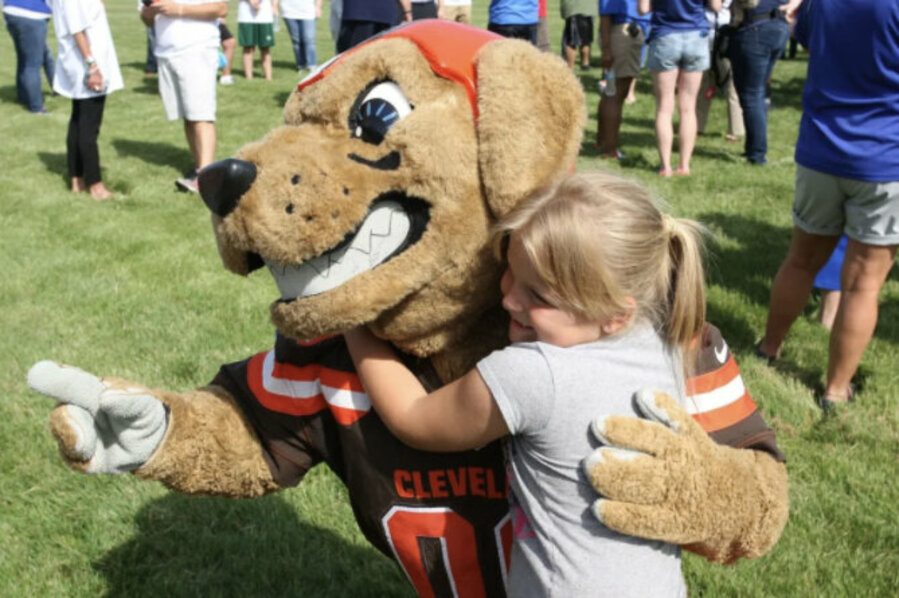 The Browns wide receiver was taken back to that moment Friday while he and Cleveland's rookie class played host to the official groundbreaking of James F. Rhodes Field at Rhodes High School.

"I know I was one of those kids who wanted a high five from one of those big-time players. So just coming out here and showing our faces (is important)," Higgins said. "I know we've got first-round draft picks to all the rookies. So it doesn't matter who you are, we're just all out here and showing the Browns care and we really care for the community. And that's all the matters."

Indeed, first-year coach Hue Jackson concluded the final week of OTAs so the team could spend time out and about serving the people of Cleveland.

And on this morning, Higgins and the rest of the Browns rookies were on hand to begin the second of five Cleveland Metropolitan School District sites that will have synthetic turf installed through a two-year project made possible by Browns owners Dee and Jimmy Haslam.

"We're really thankful for the Browns and the Haslams in our village helping us raise our children," CMSD Chief of Strategy Implementation Kevin Khayat said.

By refurbishing the fields, the hope is that students will be more inclined to participate in extracurricular activities and maintain good academic standing to be able to do those things.

Through the Browns' two-year CMSD fields project, Roye Kidd Field, James F. Rhodes Field and Bump Taylor Field will be completed for the start of the 2016 high school football season, while John Adams Field and John Marshall Field will be renovated in 2017.

"I think it's a very spot-on process. They're actually trying to do the same thing in my hometown currently. It seems like recently in a lot of different places there's been a focus or emphasis on putting in nicer facilities on high schools because it does do exactly that," said rookie tight end Seth DeValve, who hails from Manchester, Conn.

"It draws kids toward athletics, it offers them incentives for doing well in school. Quite honestly too, I think it keeps kids in public schools instead of uprooting kids who grew up here out of this city and bringing them somewhere else to a private school where they do have facilities like this.

The Browns also celebrated the second anniversary of the Browns First and Ten campaign, which was designed to inspire fans to support their local communities by volunteering at least 10 hours each year.

Joined by representatives from University Hospitals, Sherwin Williams, CMSD, the city of Cleveland and community members, the rookies also helped begin the renovation of the school's locker rooms by painting walls and new benches. Sherwin-Williams provided the paint and supplies needed to refurbish the locker room.

Asked what the new field and locker rooms might mean to the students, Higgins likened it to his own life experiences.

"I know for me, I was one of those kids in the same situation just growing up in the low-income environment and having kids come reach out to us like football players, showing us that they support us and what we're doing," he said.

"So it means a lot. I know that puts a smile on the kid's faces when we're coming out here and hanging out with them."

Khayat added: "The Browns have been a critical part of that and we all know how important scholastic athletes are in getting kids to school they got to school, they are able now to play for the Cleveland Browns this year because they got to school.

"And those fields are going to help us do that."

The Browns are dedicated to #give10 through the team's First and Ten initiative. Launched in June 2014, the Cleveland Browns First and Ten campaign is the team's community program, established to inspire fans to volunteer in and help their communities throughout the world by volunteering for 10 hours each year. Through First and Ten, the Browns are the only NFL club to promote a long-term volunteering program that unifies the team and its entire fan base, with the goal of impacting every individual's city across the globe, as well as the franchise's local community.

All Browns fans are encouraged to join the volunteering effort by signing the First and Ten pledge on the team's website and by sharing their stories with #give10.