The Browns on Thursday began a two-year project that will give Cleveland Metropolitan School District students and their communities five new synthetic turf fields as part of commitment to education, youth and high school football in Northeast Ohio. 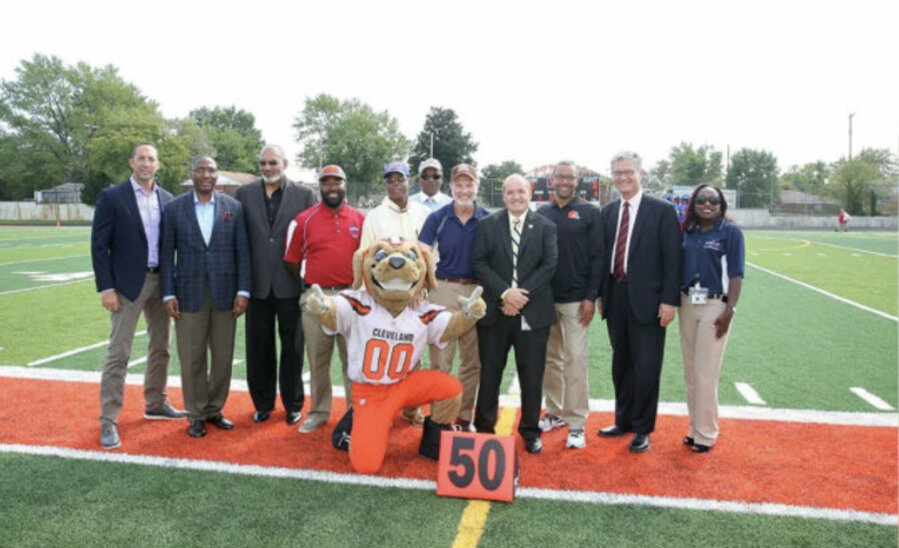 And as the Browns, CMSD and the City of Cleveland broke ground at Roye Kidd Field, you could hear the joy in the voice of Chuck Kyle, the legendary St. Ignatius coach, as he spoke of what it means to the area.

"Days like this, with the field, this is great," said Kyle, who recently joined the Browns as their youth football advisor. "Let's keep it going."

Roye Kidd Field, James F. Rhodes Field and Bump Taylor Field will be completed for the start of the 2016 high school football season, while John Adams Field and John Marshall Field will be renovated in 2017.

The project is being carried out through SCG Fields, a Cleveland-based company that constructs fields across the country, including FirstEnergy Stadium, Progressive Field, Yankees Stadium and Arrowhead Stadium.

"That's what's so exciting about it, giving back to the community," said Paul Franks, who leads the company's Business Development, Marketing and Sales in SCG fields.

Franks said the Haslams "went above and beyond with the top products out there."

"I'd like to see people use it, it's going to be really nice for the community … it's a great addition," he said.

"I think (the refurbished fields) give the coaches the opportunity to see the younger kids coming up in the program playing flag football and enjoying it. If they enjoy it at the level, they'll go to the next level," he said.

"When a kids loves a sport, Saturday morning, he'll be out here playing with his buddies. That's the way it should be. There should be an area where these kids can come and have fun playing it."

The Browns are dedicated to #give10 through the team's First and Ten initiative. Launched in June 2014, the Cleveland Browns First and Ten campaign is the team's community program, established to inspire fans to volunteer in and help their communities throughout the world by volunteering for 10 hours each year.

Through First and Ten, the Browns are the only NFL club to promote a long-term volunteering program that unifies the team and its entire fan base, with the goal of impacting every individual's city across the globe, as well as the franchise's local community. All Browns fans are encouraged to join the volunteering effort by signing the First and Ten pledge on the team's website and by sharing their stories with #give10.