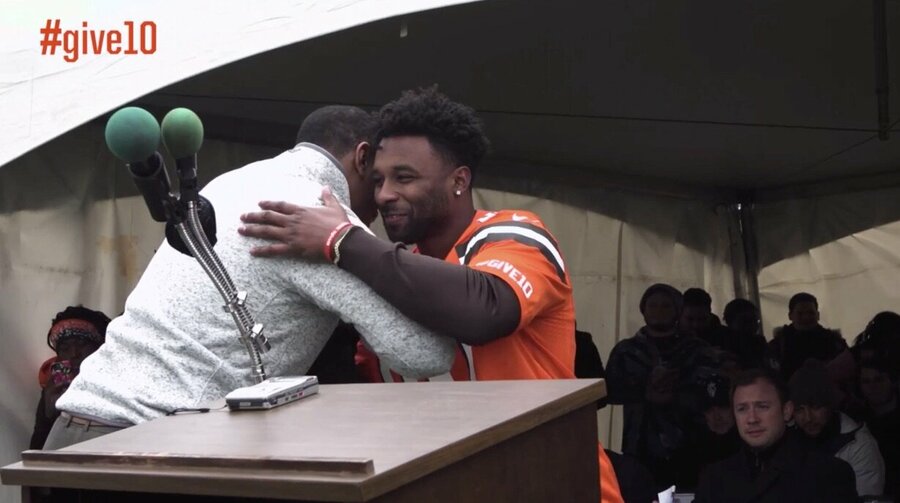 Now, they're helping spread those efforts outside of Northeast Ohio.

The Browns donated a $250,000 grant in an effort to help Toledo Public Schools install a new synthetic turf field at Roy C. Start High School. On Tuesday, they took part in a groundbreaking ceremony at the school to celebrate the undertaking of the project.

"Within the Cleveland Browns, we talk quite a bit about how we can give back to the community and make a difference. And it's not just something that we speak about, it's one of the three pillars how we view our position as a franchise," said Browns vice president of community relations Jenner Tekancic."

"We believe the basis of anything is education. If you're going to school, then you have the opportunity to play on this field … we think that this football field isn't just a field, it's a classroom."

"I'll say the Browns and the Haslam family are really deeply committed to growing football participation and removing access barriers in the community," said NFL vice president of youth football and NFL alumnus Roman Oben. "No other ownership group in the NFL has done that, so I commend the Browns."

Back in 2016, the Haslams announced a commitment to provide five CMSD fields with high-quality synthetic turf during a two-year project. Roye Kidd Stadium, James F. Rhodes Stadium and Bump Taylor Stadium were renovated prior to the 2016 high school football season, while John Adams High School and John Marshall High School were updated prior to the 2017 campaign.

The grant, which is through the National Football League Foundation Grassroots Program and Local Initiatives Support Corporation (LISC), is part of more than $3 million in field refurbishment awards allocated this year.

Through Browns Give Back, the Cleveland Browns are committed to assisting the development, safety and growth of youth and high school football throughout Northeast Ohio with year-round programming for players, coaches, officials and parents. Through camps, clinics and other initiatives, the Browns' goal is to promote healthy, social, emotional, intellectual and physical development of youth by enhancing opportunities for youth football participation and education.

The NFL Foundation/LISC Grassroots Program, a partnership between the NFL Foundation and LISC, the nation's leading community development support organization, has committed nearly $46 million to the program since 1998, supporting 336 projects nationwide.

Fields are newly built or significantly renovated, with improvements including irrigation systems, lights, bleachers, scoreboards, goal posts and turf. Grassroots grants are issued once established funding thresholds are reached for each project.

LISC identifies local, nonprofit, community-based agencies that have an interest in building or refurbishing football fields in schools and neighborhood parks. Through the program, local agencies are provided with the necessary financing and technical assistance to improve the quality and safety of fields in their communities. The agencies oversee the construction, maintenance and programming of the fields.

"Toledo LISC joins the Cleveland Browns, Toledo Public Schools, the YMCA and community partners in our efforts to expand recreational opportunities for youth and promote healthy lifestyles," Cutcher said in a news release. "The investment by the NFL and the Cleveland Browns in the Start Learning Community will increase the community's access to programming and support comprehensive community revitalization efforts."

The Browns Give Back to Northeast Ohio with a commitment to education and youth football while engaging the community through the team's signature First and Ten volunteer movement.